Barriers in Human Medicine; Biophysics and mechanics at the disease interface

To form a barrier is often the principal function of epithelial tissues; a process governed by the cytoskeletal network systems and cell-to-cell contacts. Membranes, which confine cells and cellular compartments, are therefore essential for life while membrane proteins are molecules that equip cell membranes with sophisticated functionality. Understanding how membrane proteins work and cells regulate their function in relation to processes such as molecular transport, specific ligand binding, cell adhesion and protein trafficking, is crucial in the regulation of cell and tissue function.
In this regard, cell and molecular biophysics is significantly enhancing our knowledge of epithelial lined barriers, which form crucial interfaces in human medicine.  The study of individual cells and biomolecule dynamics and interactions in tissue architecture and physiological processes that underpin function is an exciting challenge for medical research.

Nanoscale Biophysics. Studying biological processes from biomechanical perspectives can lead to a better understanding of the pathophysiology and pathogenesis of a variety of human diseases.  Changes which occur at molecular and cellular nanoscale resolution will affect, and can be correlated with, changes that occur at the microsocpic level. Nanoscale research therefore provides an alternative approach to assessing disease onset and/or progression, as well as target identification for therapeutic interventions in diverse areas from solid tumour cancers through to stem cell biology and regenerative strategies.

Atomic Force Microscopy (AFM). The knowledge of molecular mechanisms underlying the adhesive and mechanical properties of cell surface-associated molecules is crucial to understanding their functions. Originally invented for topographic imaging, the AFM has emerged as a powerful nano-biomechanical probe due to its ability to function as a high-resolution topographical imaging tool and force sensor with piconetwon resolution (Muller and Dufrene 2008). A multifunctional tool kit, the AFM probe has the ability to measure surface properties such as, friction, adhesion, Young’s modulus and viscoelasticity. In addition to these chemical and physical parameters, individual molecules can be force probed for structure/function understanding (Bippes and Muller 2011). It has opened novel research avenues through force spectroscopy, where the tip indents and retracts from samples with a controlled force and velocity (Eghiain F 2014).  Modes including Single Molecule Force Spectroscopy (SMFS), Molecular Recognition Mapping (MRM) and Single Cell Force Spectroscopy (SCFS) are used to localize and quantify the interactions of biological systems over scales ranging from cells to single molecules (See figure 1). 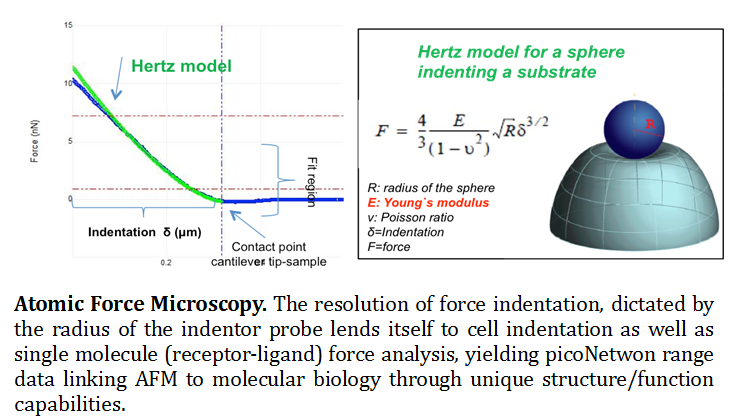 Real time single cell imaging provides novel insights into dynamic processes such as nano-structural changes that occur as a result of disease onset, or drug/therapeutic interactions.  Used in conjunction with other fluorescent based microscopy or spectroscopy methods, force spectroscopy enables the quantification of forces to allow manipulation and characterization of mechanical properties, functional state, conformations and interactions of biological systems to molecular resolution (Muller 2009). The mechanical properties of cells can be determined, while the study of receptor/ligand unbinding and protein unfolding can quantify the interactions of live cells with their environment to single receptor resolution. In this context, SMFS has recently offered new opportunities for probing the adhesion and mechanics of polysaccharides and proteins on live cells.

Fertility. AFM, for the first time, allows the complex glycocalyx of mucosal epithelial surfaces to be analysed. SMFS enabled identification of the functional dynamics of subtle glycoprotein decoration, in the context of cell-cell adhesion. Probing at the pico Newton range AFM can detect the effect of modified carbohydrate signatures on glycoproteins such as large mucin proteins (MUC1; see figure 2) in live cell systems. Biophysics has the ability to revolutionise the structure-function understanding of these epithelial cell membranes with obvious clinical benefit in assisted reproductive techniques and human fertility.

Cancer metastasis. Characterised by uncontrolled division of abnormal cells, cancer cells acquire the ability to infiltrate and destroy healthy body tissue. Carcinogenesis requires tumour populations to surmount distinct microenvironmental proliferation barriers that arise in the adaptive landscapes of normal and premalignant populations growing from epithelial surfaces (Gatenby 2008). Somatic evolution of invasive cancer can therefore be viewed as a sequence of phenotypical adaptations to these barriers. Metastasis for example, involves a small subset of cancer cells breaking away from the primary tumour penetration into the blood vessels and settling/growing in normal tissue at a distant site in the body. In the fight against cancer, it is metastasis as well as complications in surgical treatment and inefficient/non-specific action of drugs and associated side effects of chemotherapeutic drugs have been major hurdles for progress.

Early diagnosis and prevention. The information obtained from biomechanical investigations is proving useful in the development of new and improved in vitro assays and diagnostic devices. These assays and devices provide information that is sensitive and accurate enough for the early detection of disease, even when the symptoms or signs of disease are hardly discernible. This is particularly needed in diseases such as Ovarian Cancer, where the early diagnosis and detection are crucial for their prevention and control.

Drug delivery.  An important goal of nanotechnology is the application of individual molecule handling techniques to the discovery of potential new therpaeutic agents. Current therapeutic design involves combinatorial chemistry and system biology-based molecular synthesis alongside bulk pharmacological assays. Despite this, therapeutic delivery is usually non-specific to disease targets and requires excessive dosage. Improved efficiency for drug therapeutic discovery and delivery requires molecular level understanding of the therapeutics–effectors (e.g., channels and receptors) interactions and their cell and tissue responses. Nanomedical research is increasingly focused on the design, characterisation and delivery of nano-sized drug carriers such as nanoparticles, liposomes and polyplexes.

In summary, AFM is an exciting analytical tool, originally developed for the characterisation of nanometer scaled semi-conductor devices, which is now firmly established in biological, biophysical and nanomechanical research (Francis 2010). Studying the mechanics of living cells and biomolecules has enabled us to begin translating our traditional molecular biology based strength in biomarker development to insightful functional characterisations and their connections to human disease. The emergence of the AFM as a biophysical and nanotechnological tool that can mechanically probe cells and biomolecules at piconewton forces and nanometer displacement resolutions has facilitated quantitative experimental and computational studies. 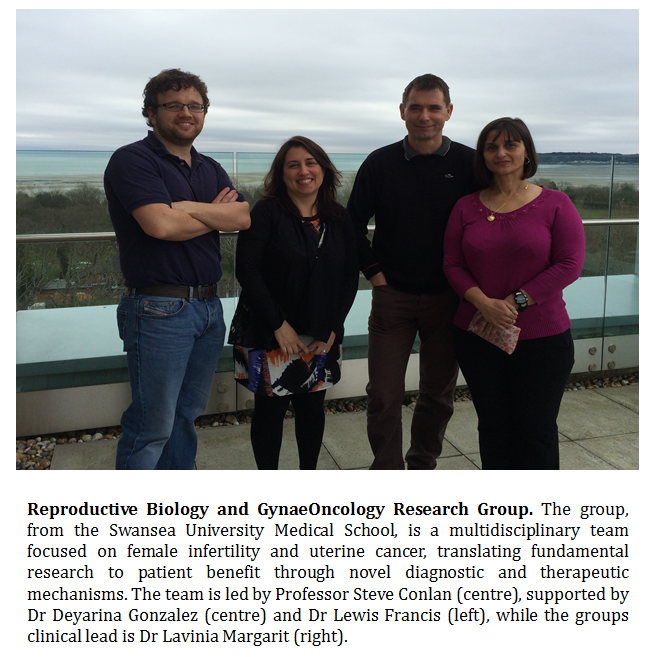